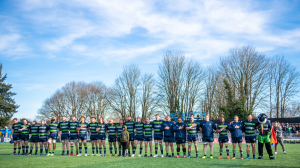 Marywood University’s Athletics Department will host the Seattle Seawolves, a Major League Rugby (MLR) team, on campus for training and practice sessions from Tuesday May 7–Thursday, May 9. The training sessions are: Tuesday, May 7, from 11 a.m.–Noon and 2-3 p.m., on the turf field; Wednesday, May 8, in the Insalaco Arena, at the Center for Athletics and Wellness, from 10–11 a.m.; and Thursday, May 9, from 10-11 a.m., in the Insalaco Arena, and 1–2p.m., on the turf field, at Marywood University

The Seattle Seawolves are an American professional rugby union team based in Seattle, Washington. The team was founded in 2017 and competed in Major League Rugby, the top-level rugby competition in the United States, which inaugurated its first season of play in 2018.  The Seawolves captured the first-ever MLR Championship last year and, as they battle eight other teams, Seattle is pursuing a second consecutive MLR championship.

Marywood University’s men’s and women’s rugby teams, led by Coach John Gulden, are in their first season of competition. Using a mixture of players with experience and those who walked on, the women’s team has won13 games. The men’s team opened up the season with a 10-man win over Juniata. The Marywood Pacers play Sevens most of the season, with a few tournaments remaining during the spring semester, but both the men’s and women’s rugby teams are already looking forward to learning and gaining additional skills from the Seattle Seawolves.