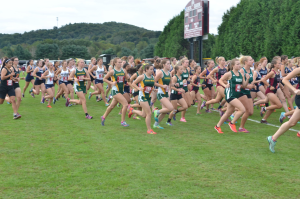 The women's cross country team finished the semester with a 3.68 GPA that was 0.05 higher than the second-highest average (Immaculata University women's soccer).

Most notably, Marywood women's cross country also was the only Atlantic East team to finish with both a Conference Championship and Team Academic Award. The Pacers won their 14th conference title in program history when they resoundingly won the inaugural Atlantic East Conference championships in early November.

Marywood was the only institution to finish in the top three academically across every fall sport. The field hockey, men's cross country, volleyball, and men's soccer teams were all runners-up in the academic standings. The Atlantic East champion women's soccer team was third in the conference; however, the Pacers' 3.51 GPA was the ninth-highest among all fall programs.

The Team Academic Award is awarded to the institution's team that had the top GPA in its respective sport through the semester(s) it played in. The GPA is calculated for each season as follows:

The first semester is in the books, which means the Fall sports officially have Team Academic winners. With tremendous grades across the board for all institutions, three schools took the top spots in all six Fall sports led by Immaculata with three. Gwynedd Mercy University grabbed two, while Marywood was named the winner of one.