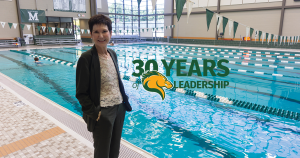 After graduating from Marywood with a B.A. in Health and Physical Education, Dr. Gunning first worked in Marywood athletics administration as an intern. When she assumed her current position in 1989, Marywood had five varsity athletic programs. Today, there are twenty-two.

In that time, she was “the driving force behind Marywood athletics,” in the words of Ann Boland-Chase, Vice President for Enrollment Services and Student Success. She described Dr. Gunning’s career as “a period of tremendous development in the athletics and recreation area.”

“Serving Marywood as a proud alumna in the role of Director of Athletics and Recreation has been a great privilege and life mission,” Dr. Gunning said. “The institution's core values are the foundation of our sports programs and recreation initiatives. Our student-athletes are empowered not only to be successful in competitive venues but also in the classroom, community service avenues, and as individuals of value.”

Interested readers can find out more about Dr. Gunning’s career by reading the announcement on the Marywood Pacers website.