A Love of Music from the Very Beginning - By Lisa Ferber 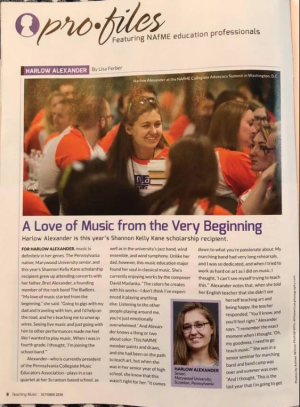 This article first appeared in the October 2018 issue of Teaching Music magazine.

For Harlow Alexander, music is definitely in her genes. The Pennsylvania native, Marywood University senior, and this year’s Shannon Kelly Kane scholarship recipient grew up attending concerts with her father, Bret Alexander, a founding member of the rock band The Badlees. “My love of music started from the beginning,” she said. “Going to gigs with my dad and traveling with him, and I’d help on the road, and he’s teaching me to unwrap wires. Seeing live music and just going with him to other performances made me feel like I wanted to play music. When I was in fourth grade, I thought, ‘I’m joining the school band.’”

Alexander—who is currently president of the Pennsylvania Collegiate Music Educators Association—plays in a sax quartet at her Scranton-based school, as well as in the university’s jazz band, wind ensemble, and wind symphony. Unlike her dad, however, this music education major found her soul in classical music. She’s currently enjoying works by the composer David Maslanka.

“It comes down to what you’re passionate about.”

“The colors he creates with his works—I don’t think I’ve experienced it playing anything else. Listening to the other people playing around me, you’re just emotionally overwhelmed.” And Alexander knows a thing or two about color: This NAfME member paints and draws, and she had been on the path to teach art, but when she was in her senior year of high school, she knew that this wasn’t right for her. “It comes down to what you’re passionate about. My marching band had very long rehearsals, and I was so dedicated, and when I tried to work as hard on art as I did on music, I thought, ‘I can’t see myself trying to teach this.’” Alexander notes that, when she told her English teacher that she didn’t see herself teaching art and being happy, the teacher responded, “You’ll know, and you’ll feel right.”

Alexander says, “I remember the exact moment when I thought, ‘Oh, my goodness, I need to go teach music.’” She was in a senior seminar for marching band, and band camp was over and summer was over. “And I thought, ‘This is the last year that I’m going to get to do this.’ There was a poster for Bloomsburg University, and it said, ‘Come down for performing arts day,’ and there was a lightbulb moment. I thought, ‘I could do this for a living.’”

Alexander would like to work as a band director in a school district. “From high school to college, I think it was the atmosphere that got me into music education. That atmosphere was created at marching band. The and the discipline and working toward one’s goals. Doing what you love with the people that you love is an amazing thing.”